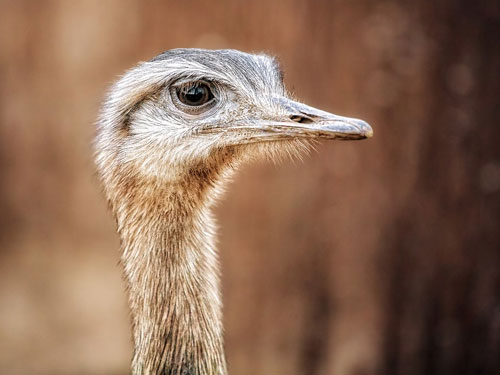 Emu oil a great enhancer of skin penetration according to one study. It's easily blendable with other ingredients and increases the overall absorption level.

In this article, we will focus on how effective emu oil is for hair growth and a number of brands that provide 100% pure high–quality emu oil.

What is emu oil?

You are probably familiar with hair growth essential oils such as peppermint oil and rosemary oil. While emu oil still belongs to the natural oil category, its origin is slightly different.

How is emu oil made? Emu oil comes from the fat of an Australian bird called an Emu. The bird is like an Ostrich, but a smaller version. Emu oil contains about 70% unsaturated fatty acids with the largest compound being oleic acid.

While the use of emu oil is not as popular as rosemary oil for hair growth, some believe it’s an incredible topical oil especially for frontal hair regrowth.

As far as we know, there is only one study by Dr. Micahel Holick.

According to Dr Holick, what makes emu oil amazing for hair growth is its ability to penetrate the outer layer of the skin (stratum corneum) thanks to high oleic acid levels. When combined with other topical ingredients (whether it’s medical or natural), the penetrating ability of emu oil creates synergistic effects to increase the potency of both.

He also mentions that emu oil is an 5-alpha reductase inhibitor (enzyme that converts testosterone to DHT), but doesn’t explain how.

Dr Holick performed a two-week experiment to find out the efficacy of emu oil for hair growth in mice.

Emu oil was topically applied to one group and corn oil (control) was used to the other group of mice. Both substances were applied three times a day

The study result reveals that mice with emu oil experienced a 20% increase in DNA synthesis, which resulted in increased skin thickness and stronger hair follicles.

How effective is it?

There are numerous hair growth products (from shampoo, conditioner to topical serums) that contain emu oil as one of their ingredients.

However, I haven’t seen any before and after photos of people using emu oil only for stimulating hair growth. Some mention that emu oil actually works amazing for seborrheic dermatitis rather than hair growth.

Not all emu oil is same

According to the American Emu Association (AEA), not all emu oil has the same quality. The purpose of the association is to provide people with trustworthy resources for choosing high quality emu oil products.

Pro emu oil is the most popular emu oil on Amazon. The manufacturer emphasizes the fact that their emu oil has been tested by an American Oil Chemist Society (AOCS) certified chemist to guarantee the highest quality.

Have you used emu oil to stimulate hair growth? Share your experience below.