UPDATE: The company no longer exists

We recently came across a company called Biologix Hair Inc. while searching for hair regrowth remedies for women.

It appears that Biologix Hair reviews are usually incomplete because there’s not a whole lot of information out there about this company yet. But if its product line is as effective as the company claims, it can be a very promising product to stop thinning hair in women.

How does it work? 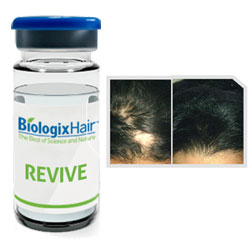 Biologix Hair claims that their solution works because it addresses the root cause of hair loss.

So what’s the root cause? Follicle Nutrient Deficiency Syndrome (FNDS). They say FNDS refers to the progression of hair loss due to micro-inflammation and malnourishment of follicles.

Biologix Hair represents itself as the best of science & nature, and it offers a proven and safe solution for the real cause of hair loss.

The company states that their hair loss treatment should be given monthly for between four and six months. After the final monthly injection, a couple of bi-monthly visits are usually needed to reinforce the hair growth. After that, a an annual visit would be recommended for upkeep; twice a year would be best.

What do people say about Biologix hair? Does it work?

There are before & after photos on the website which show amazing hair growth results, but other than the site, we couldn’t find any other information. Plus, their solution has not been approved by FDA in United States.

Most of its success stories have come out of South America, where the treatment originated. There haven’t been any double-blind, clinical studies on the treatment yet.

The company states that Biologix hair therapy system is safe and it has been used in a clinical setting for more than seven years.

It would be interesting to see their progress.

How to Accelerate Hair Growth, According to Japanese Researchers

Can Ginger Cure Alopecia Hair Loss? YEP According to This Guy